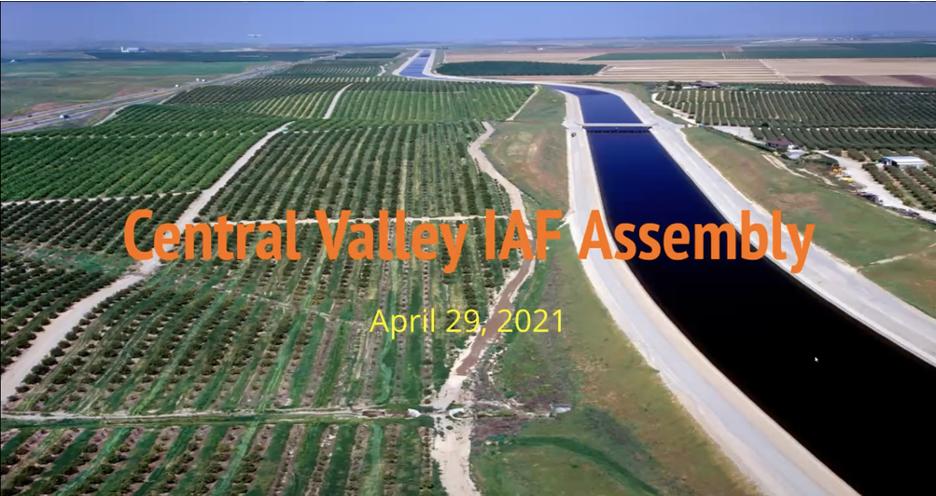 Sponsoring Committee Launched
for a Central Valley IAF in Fresno

Community Needs. Fr. Alex Gaitan from St. Anthony Mary Claret Catholic Church began with a focus statement about conditions he has experienced among his parishioners. Other Central Valley leaders shared their personal stories to explain why they wanted to create certain changes in the community. Jeff Freitas, President of the California Federation of Teachers endorsed the initiative describing Fresno as one of the poorest areas in CA, one of the richest states in the country.

Sponsoring Committee Formed. The Sponsoring Committee is comprised of institutions and leaders committed to providing training opportunities and building relationships among nascent leaders. The purpose of the meeting was to gain commitments and pledges for going forward. During the meeting, attendees made commitments to hold meaningful conversations with 500 people this summer and to organize trainings on both individual and group meetings. They formed three action teams in the following areas: 1) Administration, working on the logistics of creating a new non-profit; 2) Recruitment, working on identifying and recruiting new institutions; and 3) Money, securing contributions towards the organization’s budget.

Over $100,000 in funding commitments. Another endorsement came from Bishop Minerva Carcaño, of the California-Nevada Conference of the United Methodist Church who praised the launch and committed her organization to raise $100,000 in support of the initiative. She expressed hope that Central Valley would become a place with good jobs paying fair wages, where all have access to health care and young children receive quality education.

Supporting Leaders and Organizations. Co-Chairs of the meeting were Vicky Flores, Pastor of a United Methodist New Church Start and Keith Ford, President of the State Center Federation of Teachers. Tim McManus, Senior IAF Organizer, spoke about the distinctive aspects of broad-based organizing. Many organizations were represented among the attendees including 31 local community unions, nonprofits, churches, and schools; and 10 national and regional groups including the seven established IAF organizations in CA. 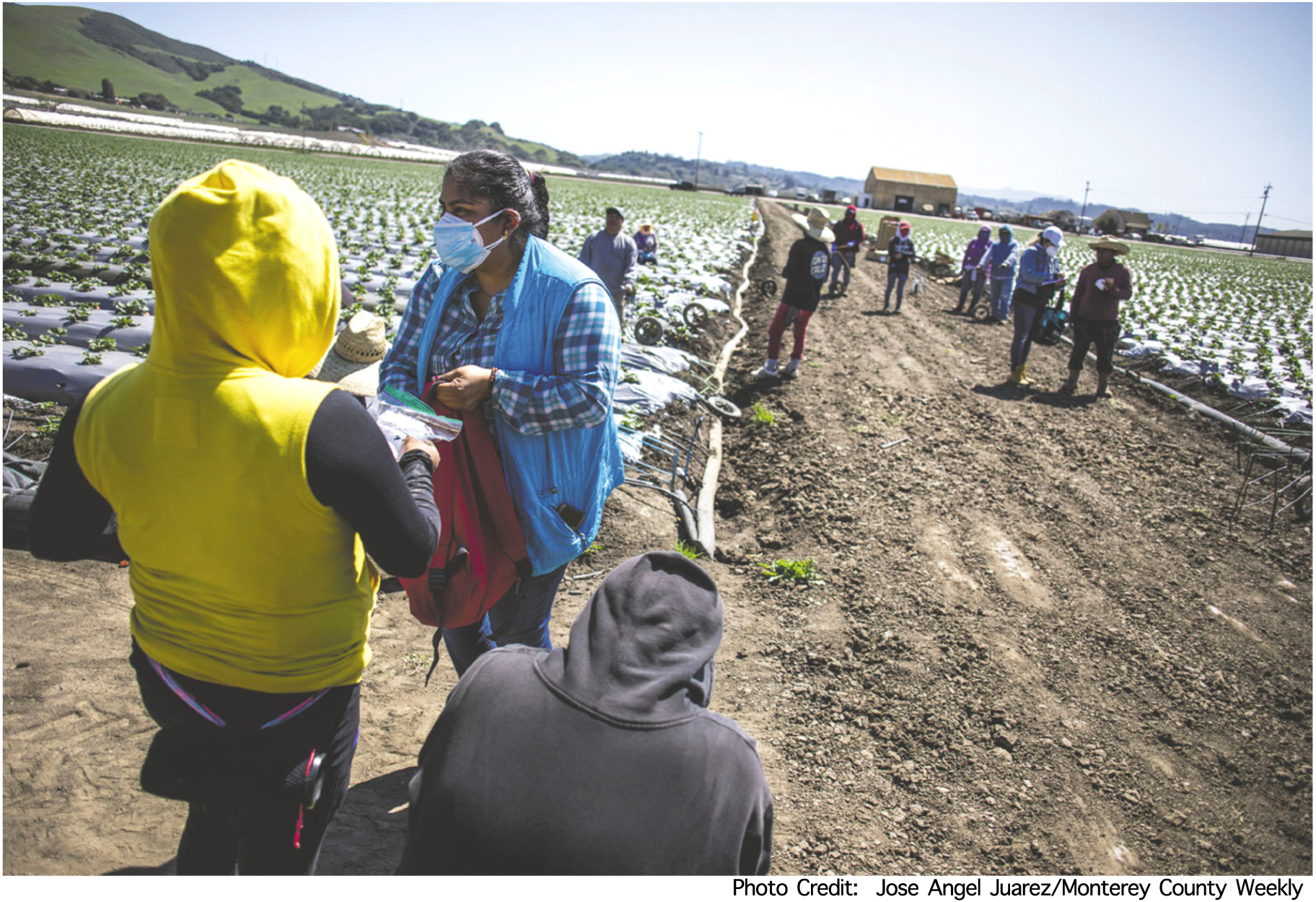 Breaking the Chain of Infection Program was Awarded $4.9 Million to Fight COVID in Monterey County. Three days before Christmas last year the Monterey County Board of Supervisors awarded $4.9 million to support COPA’s Breaking the Chain Proposal. We advocated hiring 100 community health workers (CHWs) to work in those areas hardest hit by COVID. The CHWs would teach people how to protect their families from infection, help people get tested, provide tangible support so that those who tested positive could isolate successfully, and when vaccines became available, help people get vaccinated.

COPA Helped Design and Implement the Program. The proposal was the result of hundreds of small group meetings where people talked about their families’ experiences during the COVID pandemic. Jack Herbig is one of the co-chairs of the COPA’s Breaking the Chain Task Force that helped design the program and has continued to help guide its implementation. He said he felt like “the dog that caught the car.” “We had heard stories about gaps in the County’s response to COVID and had been discussing these problems with County staff, the Supervisors, and other community organizations. Everyone recognized we were in a health crisis, so in a short period of time the Board awarded the funds and asked the Community Foundation of Monterey County (CFMC) to administer them.” CFMC eventually awarded contracts to 10 community-based organizations (CBOs) that hired CHWs, but many of the CBOs began hiring staff and sending them to training, even before they had executed contracts.

Maria Elena Manzo, the other co-chair of Breaking the Chain, is Director of Mujeres en Acción, a CBO in the Salinas Valley and a member institution of COPA. Mujeres hired 10 community members to work on the CHW program. This was a radical shift for COPA and its member institutions. We usually think of our shared work as community organizing, building the power to change systems, rather than hiring staff and operating programs. For a global pandemic, however, we made an exception. Three COPA institutions, Mujeres en Acción, Building Healthy Communities, and Community Housing Improvement Systems and Planning Association (CHISPA) stepped up and hired additional staff to concentrate on reducing the spread of infection.

110 Community Health Workers Hired through 10 Community-Based Organizations. The official name of the program is Virus Integrated Distribution of Aid (VIDA), which is currently funding over 110 community health workers (some work part time) across 10 organizations. One of the groups, Centro Binacional para el Desarrollo Indígena Oaxaqueño, is providing information in Triqui, Zapoteco, and Mixteco, indigenous languages from the states of Oaxaca and Guerrero in Mexico that are all spoken in Monterey County. “One way to stop the spread was to hire people from the community as trusted messengers to talk to people to help them understand the need of being safe, using masks, and distancing,” Manzo says.

Declining Infection Rates. Monterey County has been successful in bringing down the infection levels at a critical time when many foreign workers on H2A visas and migrant workers from Yuma, AZ were returning to the County for the spring planting season. Many organizations in the County have worked hard to bring vaccines to those areas where COVID cases are highest. One of the factors limiting vaccination was the lack of internet access and computer skills, so community health workers helped people register for vaccination appointments. During the time when appointments were scarce, CHWs received special alerts from the County Health department when new vaccination appointments became available.

In the first 3 months of the program (February – April) CHWs made over 74,000 outreach contacts; over 39,000 of these were in April alone. More than 5000 people were vaccinated at CBO-hosted clinics. In April, 88 people who tested positive were provided the essential items (e.g. groceries, diapers, etc.) that they needed to successfully isolate. In addition to these specifically COVID-related activities, CHWs connected people to other resources such as food, rent, utilities, help with medical bills.

Program Expected to Continue. The CHW program was initially funded through June 30, 2021. Though Monterey County’s current infection rate is one of the lowest in the nation, there are still many uncertainties in our situation. No one knows for certain what the impact will be when California reopens fully on June 15th. Presumably, more visitors will be coming to the area. The impact of virus variants and the impact of spending more time indoors in the fall is unclear. No one knows what the vaccination rate will ultimately be and whether vaccine boosters will be needed in the fall. All of these things would affect the continued need for CHWs to work on COVID-related tasks. Consequently, the Board of Supervisors asked that updated impact reports, expenditure reports, and an assessment of projected need be brought back to them for consideration on July 27th.